I have had an interest in the Android operating system for quite some time. I decided that the best way to get acquainted with the platform would be to port something I had already created over. In doing so I was able to learn about both the design and architectural differences of a Windows Phone application and an Android application. 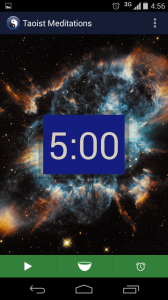 The starting point for the application is an Out-of-Box Experience detailing the features of the application. As applications are moving more towards services in their value proposition to customers, the full experience must be considered from beginning to end. The OOBE feature description screens were a Priority 1 for shipping the final product. In future projects I would like to incorporate introductory experiences into each feature/Activity to handhold a user through the experience. After the user is made familiar with the features, the most important screen is immediately made visible: the timer. This is the most basic functionality required for meditation, the one that I use more than anything else. 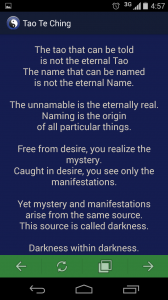 The Tao Te Ching is a direct port from the Windows Phone experience. The most difficult portion of this was interacting with the Copy/Paste functionality, which was only a minimal nuisance when dealing with scrolling interactions. 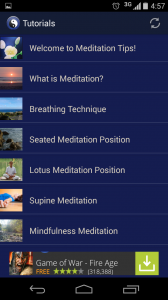 Tutorials are a new feature for the Android version. The tutorials are downloaded via an RSS feed from another website I maintain, Beginning Meditation.I will regularly update the list of tutorials on the site, which will be downloaded to the app. I chose to have the download occur when the refresh button is clicked to avoid unnecessary data use. While the xml is tiny, the images have an impact to small data plans. In the future a better architecture would be to check to new tutorials/tutorial updates via a checksum value, then download the difference if necessary. I was opted for the lowest level of upkeep on the service side, so I chose to use WordPress for storing the tutorials. 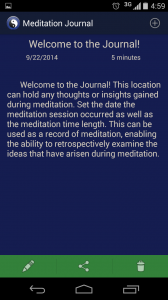 This is a new feature for the Android version. I regularly update a OneNote journal with learnings from my meditation sessions. During my competitive analysis I found that the many successful meditation apps embrace the “quantified life” and used measurement and logging to keep track of a users’ meditation practice. I would like to update this to be cloud-based, and enable a sync to Google Drive, along with a “Save to Documents” feature that will allow users to save a plain-text copy locally. 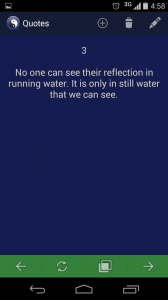 This quotes section has the same behavior as that of the Windows Phone application. 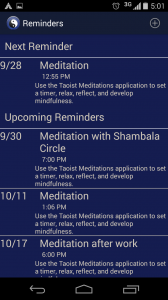 This is a new feature for the Android application. The user can see all upcoming meditation sessions that are on her/his calendar. I chose to use the built-in calendar rather than create a scheduled Task or service to remind the user of a new meditation session. This way meditation time will be guaranteed to find time in a busy schedule. 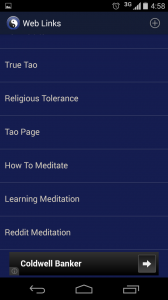 This section is the same as the Windows Phone version. I would have liked to add a sponsored link that was inline and matched the format of the Links list, but the advertisement links provided were not as useful as I would like them to be. So instead I moved the banner ad to the bottom, clearly differentiated from the web links.

Besides the addition of Google AdMob supported advertising, I also incorporated Flurry telemetry measurement. It has been somewhat useful for tracking overall time usage in each activity, which will be useful in seeing where to invest my future time for version updates. You can view this application on the Google Play Store here. Looking back, I would find it more valuable to focus n the experience rather than the addition of features/customization. Having a first run experience for each activity and a direct “Feedback” mechanism (button/shake/etc.) would allow users a greater sense of interaction with the app, making them more committed to it. Greater interactivity and multimedia experience (guided meditations, music, social experiences) would also have been valuable. This was a good first outing on Android. 1.1 is already out with bug fixes and feature additions, I am excited to one day work on version 1.2!